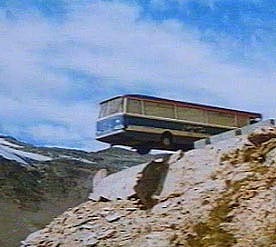 "Hang on a minute, lads – I’ve got an idea!" – That line from the
Italian Job has proved the starter of many a pub debate but following a
competition by the Royal Society of Chemistry, the riddle of what that idea was has finally been solved.

In the film, gang leader Charlie Croker says the line after a crash
leaves the gang’s coach literally on a cliffhanger. The competition was
to see if there was a way that both the gang and the gold could safely
leave the coach in one piece.

While there were thousands of entries, mainly from children with no
real clue about anything, one of the entries caught the eye of judges.

The key was to removed the gold while not tipping the coach over the
side of the cliff. John Godwin of Surrey came up with the winning entry
for suggesting a way to drain fuel from the tank and balance the coach
safely.

The solution is as elegant as it is practical. Godwin realised that the
coach needed to be stabilised. So he suggested that smashing out the
windows of the rear, over the cliff edge, would improve the weight
ratio. This would be coupled with smashing windows of the front of the
coach inwards to improve stability as well.

With the coach partially stabilised, one of the team could go outside
to deflate the wheels to stop the rocking of the coach. Next, the team
member could drain the fuel at the rear of the coach which would lose
140kg of weight and completely stabilise the coach. From that point,
the gold could be safely removed from the coach along with all the gang
members.

"It was a good long day with a calculator. It’s more than 20 years
since I saw the film – I remember thinking there must be some way of
getting that gold off the bu," Godwin told the BBC.

"I always had an idea of how they might solve this – so when
the Royal Society of Chemistry put this out to the public as a
competition it seemed like the ideal opportunity to see if it would
really work or to see if it was hot air."

Godwin managed to pick up a rather nice prize of a trip to Turin for two for three nights.