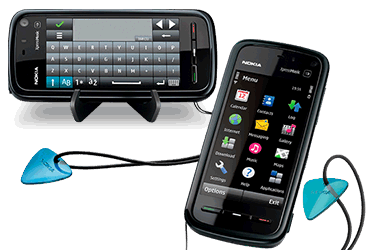 Vodafone has got its exclusive
mits on the new Nokia 5800 Blue. On the website are some great deals
and the touchscreen phone is available on contract for free.

Vodafone
has a number of tariffs available for the phone with the cheapest going
for just £20 a month, but the phone costs £98. But for an extra £5 a
month you might as well plump for this tariff as the phone becomes free
and you get 600 minutes a month and unlimited texts. The contract is an
18 months minimum affair.

Not only do you get the Nokia 5800 in blue but also Vodafone will throw in three month’s free Sky+ TV as well.

The
Nokia 5800 features a 3.2 megapixel camera with Carl Zeiss lens with
auto-focus and flash. There is Wi-Fi, Bluetooth and GPS with Nokia Maps
already bundled in. It also sports Bluetooth 2.0 with A2DP alongside a
3.5mm headphone jack and up to nine hours of talk time. There is a
microSD card slot you will need as the phone only has 81MB of internal
memory.