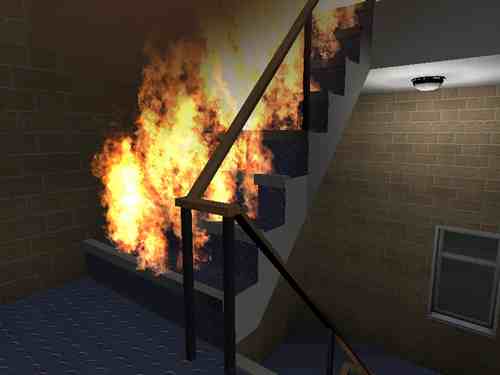 If you believe the
likes of the Daily Mail and the Telegraph, computer games lead to
social breakdown and increased violence, but researchers have found
otherwise and playing such games can help people to save lives.

Academics at Durham University have found that FPS games such as Half Life and Doom can be used to train people in fire safety and evacuation procedures.

It’s
not so much the blowing up of zombies or mutants but really down to the
underlying graphics engines used by the games to create realism.

Basically,
if you map out a real-world building using the engine from say
half-life, sans the aliens and black-suited goons, you can programme
into the environment an evacuation complete with smoke and fire.
Significantly cheaper than hiring out a real building with real smoke,
etc.

The research showed that using this technology, scientists
could find problems with building layouts and help fix them before they
became a real-life problem. Also, people going through the simulator
could be better prepared for the worst as they will have a better idea
of where fire exits were and thus be less likely to panic.

Using
a games engine rather than coming up with a virtual reality model from
scratch also shaves off a significant amount of time as most of hte
coding for walls, ceilings, floors, wind, smoke, fire and water has
already been done.

He added that by using readily available computer games, "these features can be very
easily simulated and are obviously vital in creating a virtual fire
evacuation scenario".

The
researchers tested the usefulness of the simulation compared with usual
virtual reality models on real people and all agreed that computer
games were much more realistic.

Even better when you play it in deathmatch mode against the accounts department.

Shining a light on wireless networks