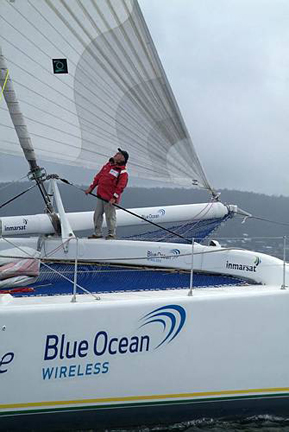 Gone
are the days when you could up sticks and set sail on the seven seas to
escape you problems, but very soon you won’t be able to escape someone
phoning you up as one company has launched a mobile phone service you
can use in the middle of the Atlantic.

Irish mobile maritime comms company Blue Ocean Wireless has got together with picocell developer ip.access to develop the ship-based system.

Now
both ship crews and passengers will be able to make and receive calls
on their mobiles while at sea, thanks to the new system. Up until now
such communication was only possible using very expensive satellite
phones.

The new system uses a picocell. This acts as a small mobile phone base
station relaying calls to and from phones. The picocell is connected to
a satellite receiver which turns off if no calls are in progress.

The
new system will also rely on satellite communication. A picocell – a
small base station that extends mobile coverage – will be installed in
accommodation areas of the ship.

ip.access chief executive Stephen Mallinson said that bringing the
technology to merchant ships will "bring the benefits of mobile
cellular communication to seafarers who spend so much time away from
friends and family."