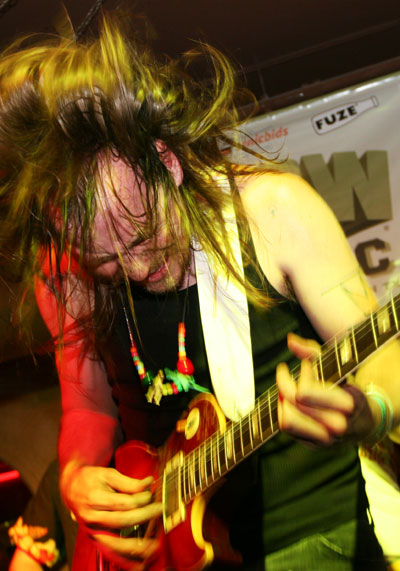 Well, not your hair, but rather a motion-sensing wig. Presumably
aiming at those who can’t be bothered learning how to play Guitar Hero,
a trio of programmers have come up with Headbang Hero,
where you show your appreciation of The Rock (the music, not the
wrestler) in the time-honoured manner and score points for it.

The game is the work of Tiago Martins, Andreas Zingerle and Ricardo
Nascimento, who sound like they should be rocking up Tokyo as part of a
death metal band but instead have been working hard on their project,
which they describe as “a kind of tribute to the popular Guitar Hero
game and headbangers all around the world.”

“Also,” they add,
“for the first time in history a wireless motion-sensing wig is used as
game controller.” To which we can only reply, yes. Yes it is.

The
first prototype of the game can be seen on YouTube. Whichever member of
the team it is demonstrating it to us refers to his mannequin head as
“Gabriela”, which the music-geek contingent of Absolute Gadget presumes
is a reference to Mexican acoustic metal duo Rodrigo y Gabriela. In
which case can we have “Diablo Rojo” included in the game, guys? Pretty
please?