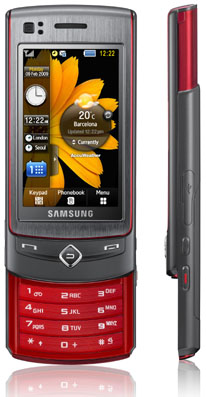 The
phone will be launched at next week’s Mobile World Congress and sports
a keypad as wells a 2.8-inch AMOLED haptic-capable touchscreen display.

The 240 by 400 resoluteion display may not send pulses racing compared
the the greater pixels on offer from Toshiba but is more of an opponent
to the lifestyle-type phones such as the LG Renior.

Music comes by way of FM radio with
RDS and supports various audio formats, including MP3,
WMA and AAC.

It features HSDPA, Edge and quad-band GSM but sadly not wireless, but
has got A-GPS and an 8-megapixel camera with dual LED flash. There is
also a camcorder that can capture full VGA at 30fps and footage can be
edited onscreen before uploading to Youtube.

The handset will hits stores in March