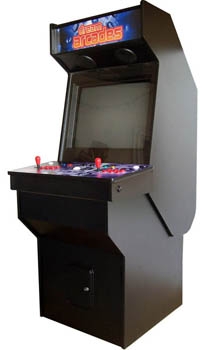 Looking for the ultimate way to play arcade-style fighting games including Street Fighter IV? Then say hello to the Dreamcade Impact by Dream Arcades…

Designed for "hardcore arcade gamers", the Dreamcade Impact lets you drop a Windows PC, Xbox 360 or PlayStation 3 into it to give you realistic arcade-style fighting.

"Impact comes ready to play, just hook up your Xbox 360 or PlayStation 3 and get ready to experience your favorite fighting games the way they were intended with real arcade joysticks and real industrial strength buttons."

"With the release of so many great arcade fighting games we wanted to give fighter fans an opportunity to experience these games the way they were intended on a real authentic arcade machine," says Michael Ware, owner of Dream Arcades.

"Plastic game pads make it difficult to execute complex moves in the heat of battle and handheld arcade control panels can be bulky sitting on your lap, but nothing can beat the experience of rubbing shoulders while you go head-to-head on your own arcade machine."