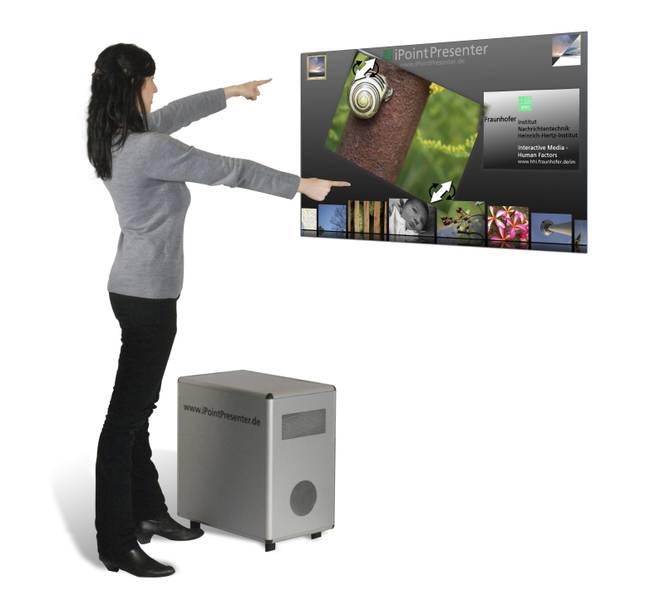 High on
the list of things that we want in The Future (just between
hoverboards and jetpacks, in fact) is a telly you can control by
waving your hands about like Tom Cruise did in Minority Report. And
wouldn’t you know it, such a wondrous device is going to be
shown off to the world at next month’s CeBIT trade fair in
Hanover.

The
device, called the iPoint, lets couch potatoes communicate with their
goggle box via simple hand gestures, without the need for special
gloves or 3D glasses or any of that bumpf. Made by the Fraunhofer
Institute for Telecommunications (part of the Heinrich-Hertz
Institute), the magic box of wonder is slightly larger than a
keyboard and interacts with FireWire cameras that monitor a person’s
hands. The cameras can either be hung from the ceiling or integrated
into a coffee table.

The iPoint
is designed both for business and casual use, with its creators
suggesting it could be used with an office computer, in an operating
room or just for a bit of good ol’ video-gaming. HHI research
scientist Paul Chojecki offered the concept of a baker kneading
pastry and being able to turn down the heat of the oven just by
gesturing – thus not getting dough on the dials.

"In
an office, for example, an architect can peruse the latest set of
construction drawings and view them from all angles by gesture
control. The finger is the remote control of the future," said
Chojecki.