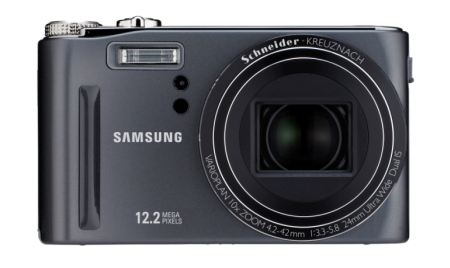 Not content with slipping out the Samsung PL10 9-megapixel camera, Samsung Digital Imaging has also been busy “breaking new ground” by including “world-first technology” in its WB550 and WB100 compact cameras.

“The WB100 model, with a 5x optical zoom and 24mm ultra wide lens, breaks ground in the compact camera category by featuring the world’s first 3.0” VGA AMOLED screen,” a Samsung PR told us.

Samsung says the organic LED screen out performs conventional TFT LCD screens with better contrast and brightness that really helps when shooting in both bright sunlight and dark conditions.

“The 960k pixel packed screen also shows fantastic detail when framing the shot and in playback,” the PR said.

Samsung was also busy “cementing its position as an innovator in the high-zoom category”, where compact cameras are equipped with the sort of advanced zoom lens technology traditionally seen only in SLR cameras.

The 12 mega pixel WB550 and WB100 cameras also include HD movie capture and photographers can use Samsung’s patented “pause and re-record” technology to capture high-def videos in one movie clip.

The WB100, available in black and silver, is expected to be priced at £329 and will also be available from April.