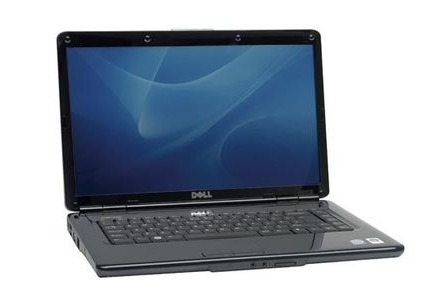 Budget laptops are getting more popular nowadays – it’s the credit crunch doncha know! So can Dell’s latest cheap laptop keep us happy on a shoestring?

The notebook is available in four finishes, three of which (Microsatin Blue, Red or Pacific High-Gloss Blue) will set you back an extra £29.99 (black is at no extra cost). Our review model was the blue one – available from PC World for £429.99 and managed to show every single one of our fingerprints on it (but it still looked nice).

The glossiness doesn’t end there, there’s more on the inside as well. It is quite the stripped-down minimalist look. Only the keyboard, speaker grille and mousepad (which looks very integrated into laptop itself) break up the look. Sadly, for the money, the laptop doesn’t include a webcam (it costs an extra £30 if you buy direct from Dell).

The build quality does not scream budget at all it has to be said. Where the cut back have been made to get this on budget are the connectivity options. While there is a 34mm ExpressCard slot, there is not the 54mm version, imiting upgrade options. But there is headphone and microphone jacks, an Ethernet port, three USB ports and a VGA-out. Some netbooks (such as the Asus N10J) even manage to fit in an HDMI port, whereas this Dell didn’t).

That aside, the recessed mousepad feels good to touch but doesn’t appear to sport the scroll facility where you can scroll down a page by moving your finger down one side of the mousepad – if it does, we never managed to achieve this).

The keyboard is great to use and just what you would expect from one of the biggest PC manufacturers in the world. The function keys long the top only function when you use the Fn key, otherwise they default to the special functions, such as toggling wireless on or off or adjusting the sound. This can be annoying sometimes when say a small child accidently turns off the sound or wireless and you haven’t realised why.

The screen is thankfully a widescreen model, so watching DVDs is good with the 15.6in 1,366 by 768 display. The viewing angle isn’t so great but that can be a good thing if you are keen on left-handed websites.

Sound is ok but not particularly great to our ears, it lacks depth and bass and indeed some punch. They are more like the sound you’d get from a business laptop from several years ago. Workable, that’s about it.

Inside, the laptop features Intel Core 2 Duo T5800 running at 2.0GHz with an 800MHz front-side bus, 3GB of DDR2 memory and Vista Home Premium. With the inclusion of Intel integrated GMA4500 graphics card, gaming is pretty much out of the window.

Battery life is definitely not one of its strong points. We had to leave the thing connected to the mains as it would run out of juice fairly quickly compared to other laptops we have tested of late.

Overall, it is a decent notebook, but we feel other devices offer better value for money.