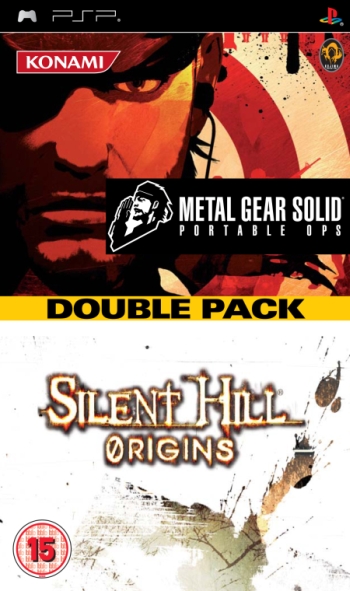 Konami is planning to double the fun for PSP owners in March, when it unveils double-packs comprising classic game pairings at a new low price. Just £19.99 will nab a twinned compilation in a special slip case on March 27.

If you need a bit of reminding about how great these games are before handing over that crisp twenty, here’s a brief of a catch up:

Metal Gear Solid: Portable Ops
Set in 1970, Metal Gear Solid: Portable Ops follows directly on from the events of Hideo Kojima’s renowned Metal Gear Solid 3: Snake Eater. The player assumes the role of series hero Snake (aka Big Boss), as he puts together the elite Foxhound unit made famous in earlier Metal Gear titles, and instigates a bloody revolt with his treacherous Fox unit.
Heralding the return of many notable characters from the Metal Gear series, Metal Gear Solid: Portable Ops introduces a new team-building mechanic that brings additional depth and gameplay. Players can capture and recruit characters they encounter and assign them to different units that will perform different functions, such as healing teammates, gathering intelligence and creating new items. Players can also recruit rare and unique characters with special abilities throughout the game. Each character is rated on a series of more than ten attributes, giving players incredible variety in building the ideal squad and creating different teams that are best suited to different combat situations.

Silent Hill Origins
This is the first time Konami’s horror series appeared on PSP and tells an original story with disturbing graphics and all-new gameplay elements. The game’s narrative reveals the origins that transformed the titular Silent Hill from a sleepy town to a hellish stronghold of terror and introduces several new characters to the franchise.

Coded Arms
This fast-paced and visually stunning first-person shooter is set within an abandoned Virtual Reality system. The VR universe was originally conceived as a training device to prepare mankind for an alien invasion, but was hurriedly shut down when the system became self-aware and created a brutal world populated with virtual, yet hostile alien races. Cast as a hacker, the player is equipped with an array of hi-tech weaponry and must cleanse the VR world of its unsavoury denizens. What follows is a gung-ho blaster, as the VR world adapts to throw wave after wave of monstrous creatures at the player – and where the normal rules of science no longer apply.