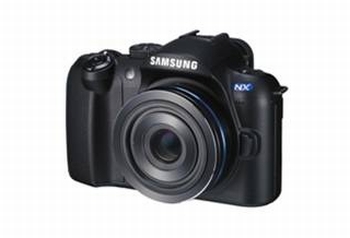 For our money, there’s always gonna be that gap between snappy cams and the professional models. But Samsung aims to cut that gap with its new range of hybrid models…

“The new concept digital camera, the NX Series, offers the performance and image quality of a DSLR and the portability and convenience of a compact point-and-shoot,” Samsung said.

Unlike a DSLR, the NX Series does not feature a mirror box and employs an “ultra-precise”, Electronic Viewfinder.

“The use of an EVF has allowed Samsung engineers to significantly reduce the size and weight of the new camera system by decreasing the distance between the lens and image sensor by approximately 60 per cent compared to traditional DSLRs,” Samsung’s statement said.

The first model of the NX Series and full range of NX compatible lenses will be available in the second-half of 2009.