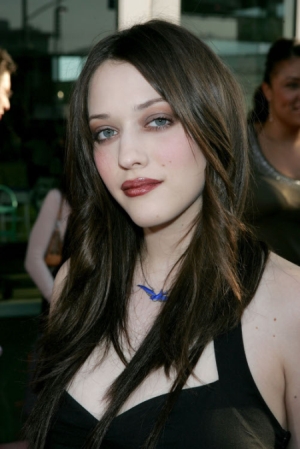 She’s the star of Nick & Norah’s Infinite Playlist, but does 22-year-old Kat Dennings have the tech chops to make her own playlist? We find out…

So thinking about Nick & Norah’s Infinite Playlist, when was the last time you made a playlist or mix tape for somebody?
Oh my god.

Or a mix CD as it would be these days.
Or a playlist that you put on a stick and give to someone if you’re me. Good lord. Officially it’s probably two years ago for my last boyfriend. And this is how good of a girlfriend I am – depending on the holiday I would make a gangster rap, record it in GarageBand and it would be super hilarious and super, super awful. I’d make all the beats and all the sound effects. And I would write it to be about him or for Christmas I did Jingle Bells, with me doing all the harmonies and did funny words instead of the proper ones. It’s genius but it’s a lot of work.

I’ve seen your video blog, you put a lot of effort into these things.
I put too much effort in! Stressful. But I haven’t done a video blog in a year.

But I’ve seen your list of current work, you’ve been busy!
Yeah but I’ve had time to do it and I’ve started and then been like, ‘Oh forget it.’ I did the press tour for Nick & Norah and by the time we finished I felt like I never wanted to look at myself or hear my voice again. And I edit those online things so just looking at myself all night while I’m editing, what a nightmare! So maybe I’ll do more but they won’t have me in them.

Maybe you could have somebody play you. You could cast them.
[Laughs] I’ll get a homeless guy.

It could be like, ‘I’m too famous to be in my own blog. I’m going to get someone else to do it for me.’
I’ll pay them SAG low-budget. But, in my defence, on the Nick & Norah DVD there’s a puppet show that I made that I spent forever editing and putting together. And it’s five minutes on the dot I believe, but it was way more than that – it was originally like 10 or 12 minutes when I first cut it together. I loved it. But that’s the product of hard work, those puppets are hand drawn. I think you’ll like it.

Have you recorded a commentary?
We did a special one for the Blu-ray that used a Telestrator, is that how you say it? It’s the thing in football games where you draw on the screen. So we were supposed to call attention to specific points of interest but of course I was drawing boobs and stuff. But since I don’t have a TV or a Blu-ray player I haven’t seen that version of the commentary yet.

Nick And Norah’s Infinite Playlist is available on DVD and Blu-ray on 25 May 2009 from Sony Pictures Home Entertainment.