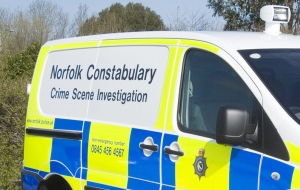 CSI. It started in Las Vegas, spread to Miami then took a bite out of New York’s big apple. But did you know it had made it all the way to Norfolk? Well today we had a chat with Alan Gilbert, head of forensic investigation at Norfolk Constabulary, about how technology was helping his Crime Scene Investigation team catch the bad guys.

How has the name change from Scene Of Crime Officers (SOCO) to CSI in 2004 been received by the public?
“As you’ll be aware, the reality of the situation compared with the TV programme is often different. But most members of the public are shrewd enough to know that television is one thing and reality is another.”

So they know that crimes are not going to be solved in an hour…
“Not often. Although, actually we have got the technology now to be able to scan in fingerprints at crime scenes and send them straight to the fingerprint bureau. They can then be searched on the national system and that can return results in an hour. So we have had some situations where we’ve actually arrested offenders who were still in possession of the stolen property as they haven’t had an opportunity to get rid of it yet.

Is reality getting closer to matching the way crimes are being solved on TV?
“The technology is moving on and allowing us to get more and more like things that are represented on the TV but we will struggle to get some of them because they’re clearly just fiction. The classic is things like Spooks, where you get this massively pixelated image and zoom and zoom and zoom and suddenly the pixels disappear and you’ve got a really sharp number plate! It’s good telly, but if only we could do that…”