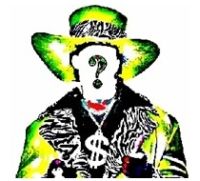 Well, if you can unveil a voice, that is. Anyway, as you know, the BT Speaking Clock has been taken over by Chris Moyles, Fearne Cotton, Cheryl Cole, Kimberley Walsh and Gary Barlow for Comic Relief. But from Thursday 12 March when you dial 123 they will be replaced by a mystery voice for three days, which we can now reveal is…

We’ve heard a little taster: "At the third squeak, the time for Comic Relief will be 8.31 precisely," he says in the voice of the character Deakus, before squeaking a rubber duck three times to mark the time.

BT will donate 10 pence per call to Comic Relief for every call made to the Speaking Clock from a BT landline between now and 23 March and has already raised £200,000 for the charity!