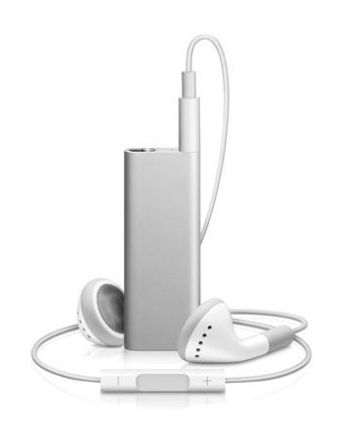 Apple has today introduced its all-new iPod shuffle, which is nearly half of the size of the previous model and is “significantly smaller than an AA battery”. It’s also the first music player that talks to you…

The 4GB third generation Shuffle holds up to 1,000 songs and incorporates all of the controls on the earphone cord.

It’s dressed in silver or black in a “gorgeous new aluminium design”, with a built-in stainless steel clip for wearability.

The player offers up to 10 hours of battery life, depending on usage, and the Shuffle will even tell you how much is left.

The new iPod shuffle is now shipping for a suggested price of £59 (including VAT) through the Apple Store.