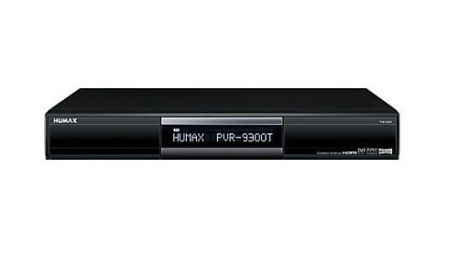 There was already a whopping 320GB of storage space in Humax’s PVR-9300T personal video recorder, but that’s just been upgraded to a collosal 500GB – if you shop at John Lewis…

The 500GB Freeview+ PVR, which goes on sale this weekend exclusively in John Lewis stores, can store up to 300 hours of programming.

However, the black PVR-9300T has two built-in digital tuners, allowing viewers to record two Freeview channels at the same time, and also make use of a host of recording features, which include:
* Live pause and instant rewind functions – in case you need to answer the phone or replay that crucial scene
* Series linking – to automatically record all the episodes of your favourite shows
* Schedule Tracking – any broadcaster changes to the programme schedule are tracked which means recordings are always accurate
* Split Recording – enables viewers to record two-part programmes that may have a break in the middle for a news bulletin, such as films.

And operating at less than 1W power consumption in standby mode, the digital TV recorder is also super energy efficient.

The Humax 500GB PVR-9300T can be purchased from John Lewis stores and online across the UK, priced at around £249.