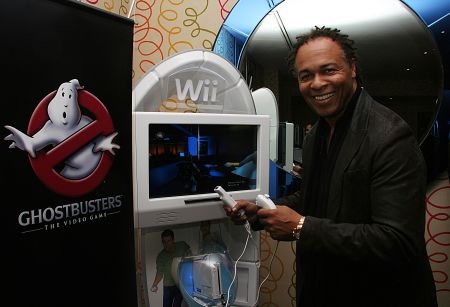 He’s in the new 118 118 adverts thanks to his iconic Ghostbusters theme. But when he’s missing episodes of 24 because of so much travel, who’s Ray Parker Jr gonna call?

What do you think of the Ghostbusters game?
I haven’t played the game yet but I’ve been looking at it. It sure looks better than it did last year, this is a big improvement.

Did they not give you a little voice part in the game?
No, I have nothing! Will you talk to these people? I think the film guys are thinking about the film and they’d say, ‘Well Ray wasn’t in the film’, so what do you expect?

But the Ghostbusters theme tune is in there?
Yes. That part is in there.

You need a service that’s going to transfer it to a laptop or other device. A few of the TV services will do that now…
They’re not fast enough, you’ve still got to wait – especially when I go home and then I’m catching another flight. For instance, I was doing a concert in Milwaukee and I came home about noon and then I’ve got another flight to London at 6pm. So in that span of time I need to take my laptop, plug it in and have it done. Maybe somebody can develop that software so it’s preset. So when I leave and get on the airplane I’ve got 24 and all my stuff. I’ll pay for it, just make it happen!


Ghostbusters The Videogame is released on 19 June by Atari and will be available on Xbox 360, PlayStation 3, PC, Wii, PS2, and DS.