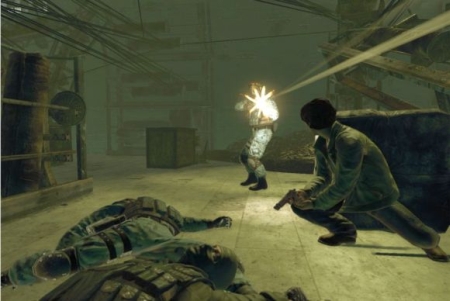 ‘I was working as a waitress in a cocktail bar and then I became a trained assassin.’ Of course I wasn’t. It’s just a new idea that I’ve had for a computer game and in my defence, it might be more interesting than the latest game by developers GRIN. Although if this game is anything to go by, they should replace the N in their name with an M.

Wanted: Weapons Of Fate plays out like so many other shooter-style titles, with the player simply moving from one area of a room to another, shooting at people, while they shoot back. Sadly, this is how a large majority of the game plays out and even the ability to fling bendy bullets around corners can’t add to the excitement. It then becomes difficult to care about the game’s outcome and even more difficult to invest in the main character, even when he is emotionally blackmailing us with news that his mother was murdered.

One of the biggest turn offs is the way in which items such as crates and other objects are positioned, strategically, for the gamer to move towards. This adds to the predictablity, as it takes some elements of control away from the gamer – with everything meant to happen in a particular way. The ability to wander or to roam around different areas in games is something that has always had the ability to hold a gamer’s attention, particularly the idea that something or someone could be in the vicinity that you’re exploring. It certainly raises the tension and it also helps to create atmosphere. This is something that Wanted is desperate to seek, but actually never finds.

At least the game’s graphics look sharp and the developers have gone all out to create something that looks authentic. Scenes such as cityscapes have a genuine attention to detail and that’s carried through to events such as one on one combat situations.

Overall, though, a weak story and a generic shooter prove that the guns and bullets franchise just isn’t Wanted here. Hopefully GRIN can redeem itself with the upcoming Bionic Commando.