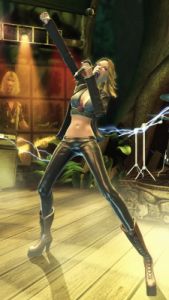 Guitar Hero Greatest Hits launches this summer and to celebrate its release Activision is giving players the chance to vote for their most memorable tracks. Voting will be carried out across major social network sites and blogs thanks to a widget application.

The brand new widget allows players to select tracks from previous games and each week a portion of the set list will be revealed based on which prior game captures the most votes.

The new game will feature re-worked versions of all songs for full compatibility with guitars, drums, and microphones.

This guitar is totally your bag baby!

Is PSP phone back on the cards?

Is PSP phone back on the cards?