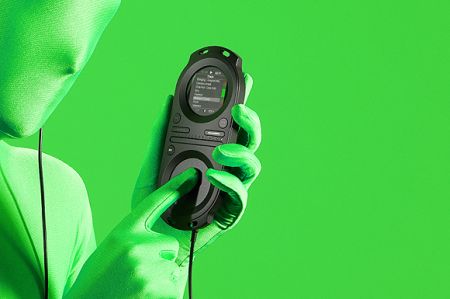 Is that a DJ in your pocket or are you just pleased to see us? Well, if you’re carrying a Tonium Pacemaker, it could well be a DJ! And the pocket-sized DJ system and hand-held music player gets an update on 1 May 2009, when it adds auto beatmatch to its tricks.

“At the touch of a button, it will allow anyone to mix tracks like a DJ,” says a Tonium suit who has clearly never seen us murder tunes on the wheels of steel.

“With a 60GB hard drive and a host of other new innovations, Tonium has designed the new Pacemaker to allow all music lovers to creatively interact with their music like never before.”

First launched in mid 2008, the Pacemaker music player allows you to play two tracks simultaneously, matching beats and mixing between the two – just like a traditional DJ set up. Users can also throw in effects, filters and loops to create their own sounds.


“While the hardware remains the same, the new Pacemaker user interface has been completely reworked, making it more user-friendly and highly intuitive,” Tonium claims.

“Alongside the auto beatmatch function is an on-screen ‘beat graph’ giving a visual representation of the beats in tracks that are playing, making mixing records so easy that anyone can do it within minutes!”

Other improvements include:
* Fast scroll and better track list filters and crates functions for the music library
* Timestretching (master tempo)
* Key, allowing you to change the key of the track and avoid any key clashes when you mix!
* New effects such as Crush, Wah, Delay and Trans
* The ability to customise the touch pad, arranging the array of effects wherever you want.

Tonium said it will make this new interface available as a 100 per cent free firmware update to all those who already own a Pacemaker, meaning that once purchased, you will never own an outdated device.

The 60 GB hard drive can store 15,000 tracks and will work with all file types including MP3, WAV, FLAC, AAC and OGG.

Tonium will also offer a new and improved Pacemaker Editor to its users; a free, downloadable PC and MAC compatible application that allows you to play music and edit and create mixes. Users can download mixes they’ve created from Pacemaker, or upload mixes to it from the Pacemaker Editor.