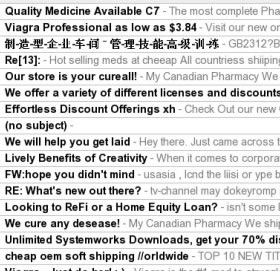 One in four Brits send emails to deliberately avoid social contact with certain individuals, according to research by the free email service GMX.

Younger users are also using email as a way to avoid stressful conversations, with over 40 per cent of 16-24 and 25-34 yr olds using email in this way.

And it seems that first impressions aren’t only saved for face-to-face encounters, with more than half of the British public (54 per cent) admitting to basing social judgments on the style of emails they receive.

Those questioned in the research said they formed opinions on aspects such as the sender’s intelligence, age and social status from the messages they sent.

Perhaps as an antidote to this, younger users were more inclined to adapt their own image over email – with two thirds happy to do this.

In comparison, only one in three adults admitted to purposefully adapting the language and style of their emails to create their own email image.

“Email is today a highly valued means of communication for most Britons,” said Eva Heil, MD at GMX.

“An individual’s approach to their email has never been so important.”