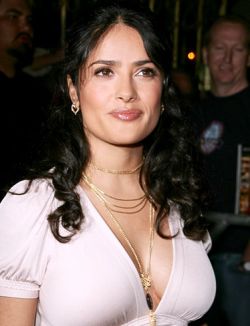 The world now knows which iPhone applications Salma Hayek has downloaded from the Apple iTunes Store, when she has arranged to have her Japanese face massage, and that her billionaire French husband François-Henri Pinault pays her bills. How? Well, it seems someone has hacked her email account.

According to reports, the Oscar-nominated actress had her MobileMe account hacked after cybercriminals reset her account password by correctly entering her date of birth and guessing her secret question (reportedly the name of her most famous film role).

Graham Cluley, senior technology consultant at security firm Sophos, said it was becoming more common for prankster internet hackers to break into a celebrity’s account and expose their private conversations.

"The lesson here is that no-one, whether a Hollywood celebrity or a Cricklewood hairdresser, should leave their email accounts poorly defended, Cluley said.

“Hayek’s mistake was to leave her MobileMe account accessible to anyone who could search for her ‘secret answers’ on Wikipedia."

Hayek is the latest in a string of celebrities, including Paris Hilton and Sarah Palin, to have their email accounts hacked.