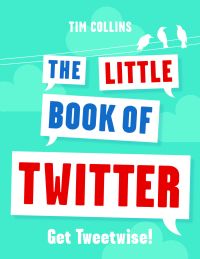 A book about Twitter. Is that Twitterature? Does it have a twist as well as Twits? No, but author Tim Collins promises to give you the low-down on social networking’s current big thing…

The Little Book Of Twitter offers tips and tricks for getting tweetwise and has lots of Twitter-related humour.

Advice and features include:
* How to get started
* The weirdest and wittiest Twitter feeds
* The netiquette of Twitter
* The best celebrity tweeters
* Tweeting at work
* You know you’re a twitterholic when…
* Great works of literature in less than 140 characters eg The Taming of the Shrew: ‘A woman shouts at some men. A man tells her to stop or he’ll hit her. She stops. They kiss. That’s alright then.’

The Little Book Of Twitter will be available from 9 June 2009 from Michael O’Mara Books with an RRP of £3.99.