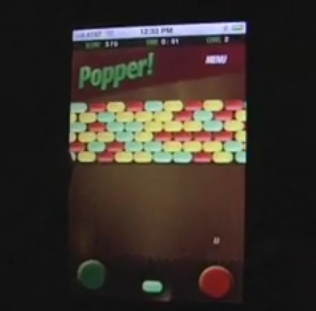 Developer Clever Twist has announced that its new iPhone app Popper! will be available for iPhone and iPod Touch tomorrow. “If you like Tetris

Popper! tests your aim and agility in knocking off like-coloured pills.
There are 10 levels of game play, with each level increasing in difficulty.

The game also tracks the name and high scores for all users on the handset.

How to play:
* Press the red fire button to shoot a pop
* Hit rotating like-coloured pops to clear each screen
* Clear the pops quickly – when they start to glow red it means they’re about to cross the dotted "die line" at the bottom of the screen
* When the bomb symbol appears press it to clear loads of pops all at once!
* When the clock symbol appears, tap it to gain more time for that level
* When the rescue ring appears, tap it to move pops further from the die line
* When the 100 or 200 icons appear, tap on them to get more points.