So, you’re
in a car and you crash. You’re fine, because you have a
driver’s airbag. Your friend’s fine, because she has a
passenger airbag. But what about the poor bloke you just ran over?
Well, he’ll be fine too because you’ve conscientiously
fitted a pedestrian airbag. Well done you!

The new
kit has been developed at Cranfield University, which boasts the
Cranfield Impact Centre (CIC) . Their research has shown that in a
car crash, the luckless pedestrian is most likely to hit the bottom
of the windshield, so that’s where they’ve put the
airbag. It has radar and infrared tech to "pre-detect" a
collision with enough time for the bag to inflate.

"Test
results indicate that the system works extremely well," said
Roger Hardy, the CIC’s man in charge of "vehicle
crashworthiness". "When fitted to a demonstrator vehicle
not originally designed with pedestrian protection in mind [a Fiat
Stilo], the results were well inside all current legal criteria for
pedestrian protection currently in force in Europe.

The bag
has a U-shape so the driver can still see what they’re doing,
while protecting the pedestrian from the bottom half of the A-pillars
(the fancy term for the windshield frame) – the stiffest part
of the windshield. The airbag also raises the bonnet several inches
to help cushion the blow, much like the Pedestrian Deployable Bonnet
System on the Jaguar XKR

A standard
Stilo hitting a pedestrian at 25 mph would have a Head Impact
Criterion score of about 1,000 – which means an 18% chance of a
life-threatening injury. That’s reduced to between 692 and 945
for a Stilo fitted with the airbag and between 234 and 682 when the
raised bonnet system is included too.

The
airbag’s activated by a pyrotechnic device, which means no
stored air or gas supply to worry about. Hardy reckons production of
the system could begin in as few as five years, and it shouldn’t
add much to the price of the car. And who knows, maybe that
pedestrian you’ll save five years down the road will be an
eccentric billionaire who showers you with gold in gratitude for your
thoughtfulness.

(Absolute
Gadget does not endorse running people over for financial gain.) 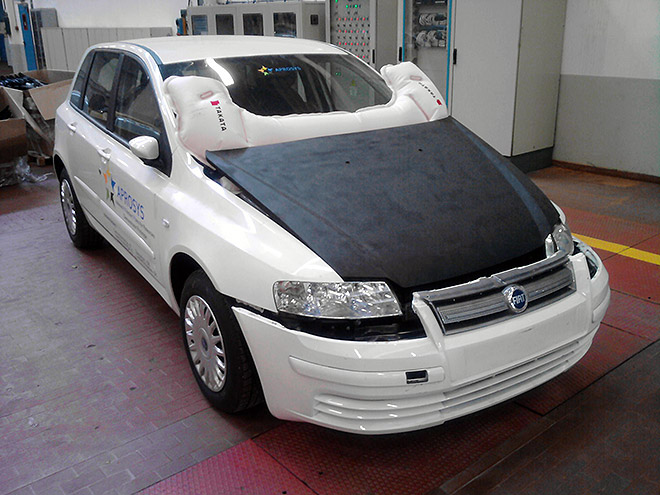