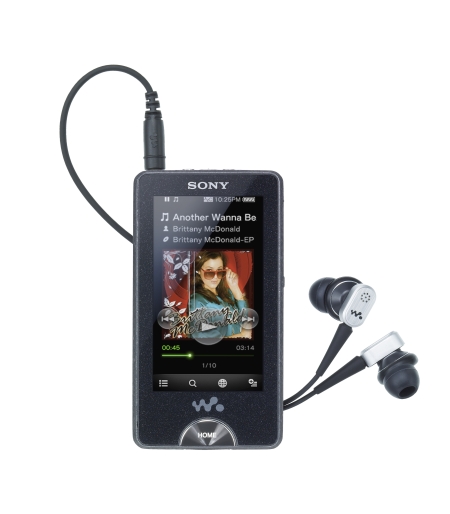 “We’re going back to what Sony does best,” says Wes Deering, Sony’s audio product manager. “”We want to be the best in terms of sound and vision.” Having had a play with the new X Series Walkman yesterday, Deering makes a strong case.

“The OLED touchscreen is the key advantage,” continues Deering. “It uses less power than an LCD so gives better battery life and with a 10,000:1 contrast ratio it delivers blacker blacks and much deeper colours than current media players.”

The devices are compatible with MP3, WMA, ASC and Linear PCM sound formats, as well as WMV, MPEG4 and AVC video standards. No DivX playback, we hear you ask?

“We’re studying the formats people use and possibly looking at DivX for the future,” says Deering.

In the meantime users will have to find their own bit of third-party software to convert DivX files into one of the formats the X Series does play.

So, what else do the players do?

Well, they work on Apple Macs – appearing as a hard drive you can drag and drop content onto.

They also access the web using a Wi-Fi connection, including the automatic download of podcasts when you’re online and a direct button to quickly view YouTube content. You can’t transfer files over Wi-Fi though, only the USB connection.

The device is set up to sync with Windows Media Player. It will also transfer any DRM-free content from iTunes, such as ripped CDs. However, any tracks you bought that are locked on iTunes won’t make it over.

The supplied headphones appear adequate on first test, offering a bit of leakage when we really whacked up the volume but nowhere near the level of the standard Apple jobbies.

Sound quality is high, but it’s that 3-inch OLED screen which really delivers. We can certainly see ourselves digging this out of our pocket to catch up on the latest unmissable TV from the BBC iPlayer.

Find Top Gear’s Stig on your iPad or iPhone

The Sims get Medieval

OmniMount puts your TV in the picture

Further adventures for Doctor Who

PS3 PlayTV to get an update

Sony hides its TV sound inside