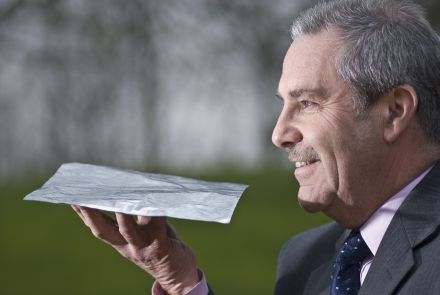 Loudspeakers. Bit bulky strapped to the walls of your home (even if wireless systems have now done away with those trip-hazard cables). But what if the speaker itself was a flat piece of material? It could be attached to your wall and disguised – maybe even to look like a painting…

That’s the idea behind a groundbreaking new loudspeaker, less than 0.25mm thick, developed by engineers at the University of Warwick.

“It’s flat, flexible, could be hung on a wall like a picture, and its particular method of sound generation could make public announcements in places like passenger terminals clearer, crisper, and easier to hear,” says the UoW website.

“Lightweight and inexpensive to manufacture, the speakers are slim and flexible: they could be concealed inside ceiling tiles or car interiors, or printed with a design and hung on the wall like a picture.”

The technology has been pioneered by University of Warwick spin-out company, Warwick Audio Technologies and is called  the Flat, Flexible Loudspeaker (FFL).

One future-gazing sci-fi fan has already had a brilliant idea of how it could be used to put you in the soundtrack of a movie like never before.

"Now, imagine that speaker as a carpet. Room sized. Yeah. You got it," says Jamie Starbuck on the SFX blog.

"We’re watching Star Wars IV: A New Hope. Up go the titles and here comes the Star Destroyer… and you’d feel the rumble moving forward. Feel the tie fighter scream… underneath. The rumble would be immense! See those poncy Dolby adverts? It’d put those to shame, surely."