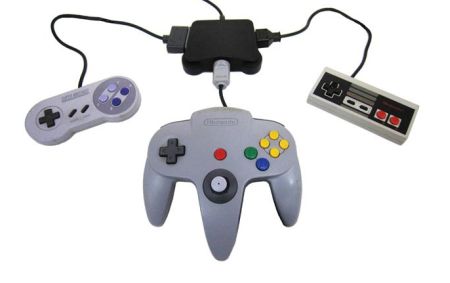 Hey!  Mr/Mrs Wii owner! You’re a diehard Nintendo fanboy/girl.  You’re so hardcore you downloaded a whole bunch of NES, SNES and N64 games on Virtual Console despite already owning them, because you were afraid playing the old cartridges might make them fall apart. But you don’t like the Classic Controller! What do you do?

The answer is you buy the catchily-monickered 3-in-1 Virtual Retro Adapter from accessory floggers Innex.

The 3I1VRA (see, catchy) is a little widget that pops into the Wii’s Gamecube controller port, and bam! Three generations of console controllers can plug in the sides. Although presumably not at the same time.

It’s even shaped like a mini-N64 for an extra delicious retro hit.

The adapter is due to hit American shelves in July for $20, and we see no reason why it shouldn’t be instantly importable.  Doesn’t mean there isn’t one, admittedly.