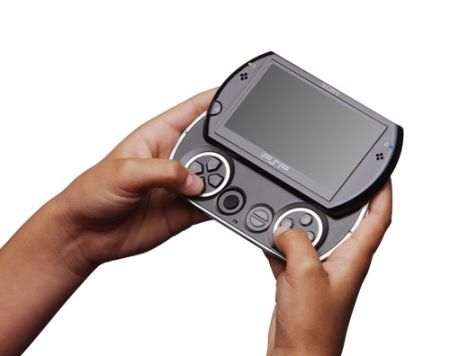 After months of rumours, the PSP Go will be shown off at E3 tomorrow.  Hoorah!  Except, um, it’s all been leaked quite thoroughly already. Bits and bobs have been slipping onto the ‘net for ages, but over the weekend an official video was accidentally posted to a Sony website before being pulled.

The video featured Sony’s John Koller saying, “It’s a 3.8-inch screen, it’s 43 per cent lighter than the PSP-3000, 16GB Flash memory, Bluetooth support and all digital content so the UMD drive goes away.

“So it’s going to be something a lot of consumers like – download straight to a hard drive,” he added.

And just to round things off, Eurogamer got hold of a load of official pictures of the machine, showing that the sliding-screen shape muttered about for yonks was bang on the money.

A spokesman for Sony refused to confirm the launch, saying any announcements would be given on Tuesday.

We’re kind of hoping the announcement will consist of someone coming up on stage, saying, “Well, you know it all already, don’t you?” and storming off in a huff.