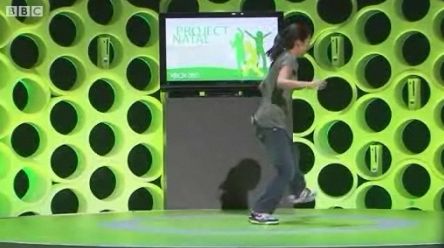 Hints of some sort of motion controller for the Xbox 360 have been whirling around for years, and at E3 yesterday it was finally unveiled.  And it’s a lot more impressive than a controller.

Project Natal is a camera that includes a special sensor, an RGB sensor, a depth sensor, a multi-array microphone and a special processor built in.  It plugs into your 360 and recognises faces, body movements, objects and voices, theoretically allowing you to do away with a control pad altogether as you control the games by moving and speaking.

For instance, a girl plays an F1 game by holding her hands up as if she was holding a wheel and “steering” in midair.  A boy picks up his skateboard and says, “Scan,” which causes the camera to scan his board into the game, which he then controls by pretending to stand on a skateboard and moving his body appropriately.  Voice recognition allows a family to play a Buzz!-style quiz by simply speaking the answers.  A woman chooses a movie to watch on the NXE dashboard by – yes! – moving her hands like Tom Cruise in Minority Report.

Obviously the video shouldn’t be taken as gospel; development kits were only sent out to Microsoft partners yesterday, so expect a quite a while before anything appears, and even then we doubt it’ll be as impressive as it looked straight off.  (Remember the Activator for the MegaDrive?  Or the EyeToy?)  But it’s pretty jaw-dropping, nonetheless.

And incidentally, if you’re wondering about the name, Microsoft explains:

“Alex Kipman, who incubated the project and is from Brazil, chose Natal, a city along the northeastern coast of Brazil, as a tribute to his country. In addition, he knew that Natal also means ‘to be born’ in Latin. Given the new audiences ‘Project Natal’ will bring to Xbox 360, this felt right.”

And it’s pronounced as in the first part of “Natalia” rather than as in “anti-natal”.  Impress your friends!