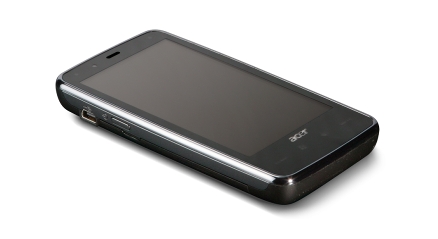 “Since its first debut [as opposed to those second and third debuts – Ed] at this year’s Mobile World Congress in Barcelona, Acer F900, the third and newest addition to the Acer Tempo Smartphone Series, is now reaching global markets.” We think this means you’ll be able to buy the Acer F900 in the UK soon.

Here are some highlights for those who missed it the first time around:
* 3.8-inch VGA screen
* Internet Explorer 6 with JavaScript and Adobe Flash Lite support
* High-speed 3.75G HSDPA/HSUPA connectivity
* Pre-installed Google mobile services such as Google Search, Google Maps, and YouTube.

The F900 also comes with the new widget based Acer 2.0 User Interface for “easy one-hand navigation”.  Which means the interface is designed to offer flexibility when it comes to arranging your desktop, giving you direct access to the applications you use most: one-touch phone calls, jukebox music, interactive photo albums, etc.