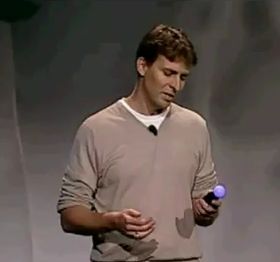 Nintendo has the Wiimote. Microsoft now has Natal. And Sony has the Sixaxis. Which no-one likes. So Sony has come up with a new motion controller for the PS3. The Motion Controller – we’re presuming they’re going to come up with a different name later on – is still in its early stages and was shown off as a tech demo at E3.

It uses two controllers that work with the Playstation Eye camera.  Much like the Wii, a sensor sits on top of the TV and detects the position, distance and movement of two controllers held in a user’s hand.

The two controllers can measure how close they are to each other and also the sensor, allowing for full 3D movement in-game. The demonstration involved Sony employees wielding tennis rackets and swords, firing a bow and arrow, writing on screen and manipulating objects in a virtual environment.

Dr Richard Marks, who developed the EyeToy for the PS2, noted that, “One thing that is really difficult to do in a virtual world is drawing.  And in particular, writing requires extreme precision. [The controller can be measured] to sub-millimetre accuracy.”

After Microsoft’s all-singing, all-dancing Natal, the controller seems unflashy, and didn’t get critics’ pulses racing.  Steve Boxer, games writer for The Guardian, summed up the mildly interested reaction of most:

“I thought the basic idea behind the controller was sound and could lead to some interesting gameplay, but it was very much a tech demo, and compared to Project Natal, it didn’t look quite so compelling.  But kudos to Sony for recognising the need to make some sort of physical controller.”