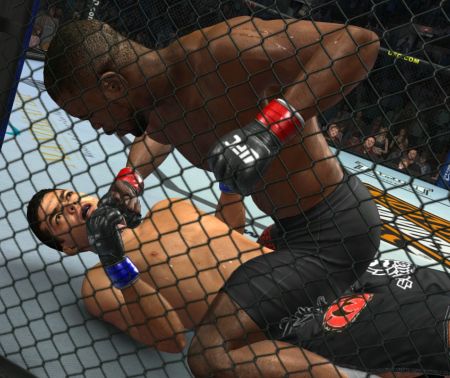 Renowned as one of the planets most brutal forms of entertainment, the UFC has now branched out into the gaming world and if Laying the Smackdown in the WWE has become a little tiresome, this new game brings something different to the table, even making the gamers feel as though they were actually involved in real life combat situations.

The objective is simple enough to understand; render your opponents unconscious by kicks and punches to the head in order to become the Ultimate Fighting Champion.

UFC 2009 plays out, at times, like a physical endurance test for the gamer; arms haven’t ached like this since the golden days of the joystick era. You’ll need a spit bucket and a sweatband when you play this game.

Brock Lesner, George St-Pierre and Anderson Silva, are just some of the 80 available fighters and with weight divisions ranging from Light Heavyweight to Heavyweight, there’s plenty to keep die-hard UFC fans happy.

The highlight of this game is the Career Mode, in which you create your own wrestler, before then going on to train and compete for a chance to become the Ultimate Fighting Champion. In real life, these kinds of chances don’t come along, or at least they haven’t so far anyway, and so the chance to dish out a computer simulated beat down shouldn’t be passed up lightly.

The longevity of the game might come into question for some, as all of the fighters suffer from having a small array of offense in their styles, and it is just a matter of time before you find yourself longing for some extra moves.

Make no mistake about it though; this is not a game to be taken too seriously. It’s a game made for a night in with a curry, some beers and a group of friends. Just don’t let your trainer see the Curry’s and the beer though, or he’ll frogmarch you down to the gym for a long and arduous training session.