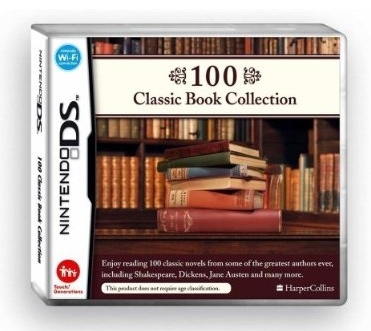 Father’s Day is on its way and we’ve been wracking our brains as to what to recommend for the man who has everything. Well, if he’s a DS Dad why not turn his handheld console into a portable library? We handed Nintendo’s 100 Classic Book Collection to a dad of two to see how he got on…

Starting off with the tutorial you get to grips immediately with the product, which superbly guides you through all of the aspects of how it works from:
* How to scroll through the books
* How to choose a book
* How to turn the pages
* How to change the font
* How to bookmark when you have read enough.

Within minutes I was reading Shakespeare’s Romeo and Juliet, a personal favourite, but just to test the functionality I bookmarked it at page seven, exited and switched to Charlotte Brontë’s Jane Eyre.

Again I read a few pages before again bookmarking and switching back to Romeo And Juliet and was taken straight back to page seven, completely seamlessly.

It’s simple, it’s effective, in fact I’d go as far as to say brilliant. The only problem is that you DS doesn’t have the library smell of a well thumbed book but that hasn’t stopped me working my way through most of the Shakespeare that I read at school and now onto a book I’ve always wanted to read – Moby Dick.

I suppose the only other thing to wonder is where will Nintendo take this next? The entire works of Enid Blyton, to target a younger audience? Maybe the entire works of Terry Pratchett, with Tolkien’s Lord Of The Rings and JK Rowling’s Harry Potter books thrown in as well? I just hope the listing is as good as this collection as I’m well and truly hooked!