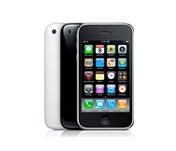 Apple has sold over one million iPhone 3GS models in the first three days after its launch. In addition, six million customers have downloaded the new iPhone 3.0 software in the first five days since its release.

“Customers are voting and the iPhone is winning,” said Steve Jobs, Apple’s CEO. “With over 50,000 applications available from Apple’s revolutionary App Store, iPhone momentum is stronger than ever.”

According to the press release, the new iPhone 3GS:
* Is up to twice as fast as iPhone 3G
* Has longer battery life
* Offers a high-quality 3-megapixel autofocus camera
* Easy to use video recording
* Hands-free voice control
* Includes the new iPhone OS 3.0, with over 100 new features such as cut, copy and paste, MMS, Spotlight Search and landscape keyboard
* Twice the capacity with a 16GB model and a new 32GB model.

“The iPhone is the first one that actually does do pretty much all of those things that were being envisaged five or six years ago and being rammed down our throats with third generation,” said Olly Tagg, MD of phone recycling company Fonebank, complimenting the original iPhone.

“I had one for two weeks and couldn’t get on with it either,” added Mark Harrison, sales director of Fonebank.

Another journalist in the discussion pointed out that typically most iPhones aren’t being used for calls, they’re in people’s hands.

“That’s true, people are just tapping away at them aren’t they,” agreed Harrison.