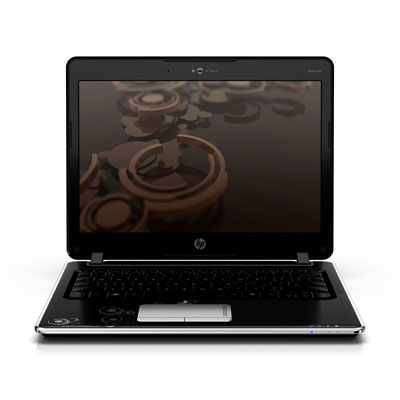 While many companies have been knocking out netbooks
left, right and centre, HP thinks that you could probably stick a
slightly bigger screen and add a few pounds to the price. So doesAMD too – no wonder that HP has used the chip company’s Neo platform with which to make a Netbook plus.

The HP Pavilion DV2
is possibly on the next level up from equipping a notebook with an
Intel Atom. Th processor at the heart of the computer has a bit more
computing power and the display (12-inch) is slightly bigger.

The 1.6GHz Neo manages to perform tasks slightly better than the Atom and the laptop also comes with AMD’s ATI Radeon
video card, so playback of video should be better. That said, it has to
run Vista which can be a resources hog compared with the more modest
requirements ofXP . Also, at around £500, it compared badly with the
likes of the more keenly priced Samsung MC20. For five hundred green
ones, you may as well buy a normal laptop.

Looks-wise, the DV2
takes its cue from the rest of the Pavilion range. It has a mirrored
touchpad (which we weren’t keen on using that much) and a swirly
pattern on it, presumably giving it a more feminine touch. The keyboard
within the high-glossed finished computer has flatter keys making it
more like Apple’s or Sony’s current line-up than its predecessors.

{mospagebreak}That said, it is usable and won’t cause finger-ache when in long use,
but is narrower than most so wil take a bit of getting used to.
However, the mirrored touchpad is irksome, causing too much drag when
trying to click and drag things on the screen.

The machine is also a lot thinner than the Samsung NC20 of Dell
Inspiron Mini 12, so will appeal to those that want to carry their
computers around in a handbag.

The 12.1-inch widescreen LED screen has a 1280 by 800 native resolution
– this means that it can display web pages a hell of a lot better than
a typical netbook. It also means that playback of HD material in 720p
is entirely possible.

As the laptop sports a 1.6GHz AMD Neo MV-40 processor is can run Vista
reasonably smoothly. But as it only has a single core running,
multitasking is a bit beyond its means. That said, it has a discrete
512MB ATI Mobility Radeon HD 3140 GPU so playing FPS games is
achievable.

When using the laptop for video playback we managed about two and a
half hours before the six-cell battery. This is short of what we would
have expected from an ultra-portable.

{mospagebreak}While the DV2 is a better bet, performance-wise, than an Atom- or Nano-
based netbook, for the money you would be able to get a dual-core
laptop that would run rings around this. The laptop was sourced from PC World.