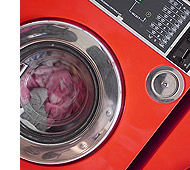 Scientists have come up with a prototype washing machine
that uses virtually no water but still managed to make your clothes
whiter than white.

The carbon footprint reducing device only uses a drop of detergent and
as the clothes hardly get wet, they require less need for a tumble
dryer.

The secret to the machine cleaning ability rests with the use of
polymer beads. Prof Stephen Burkinshaw of Leeds University, who founded
Xeros discovered that certain types of beads cleaned clothes better
than normal detergent and water. However, the problem was then how to
remove the beads from the clothes once the cycle had finished.

Engineers from Cambridge Consultants helped Xeros to make a prototype
machine which could herald a
production model by the end of next year. It found that by changing the
way the drums rotate, the beads could be used then fall through the
messh of the drum allowing them to be used hundreds of times more.

Professor Burkinshaw said: "The performance of the Xeros process in cleaning clothes
has been quite astonishing. We’ve shown that it can remove all sorts
of everyday stains including coffee and lipstick whilst using a tiny fraction
of the water used by conventional washing machines. The investment from
IP Group will help us to accelerate the commercialisation of the technology
and I look forward to seeing new washing and dry-cleaning machines that
use the Xeros technology."

The technology will initially be aimed at the commercial market but it
is hoped that it commercial success will propel it into homes
everywhere.

Suddenly, our hallowed Dyson has a rival for our washing attentions.

Don’t wash your clothes, Swash them!