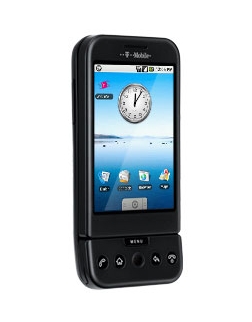 An exclusive black edition of the G1 Touch will be available only from T-Mobile in mid-July.

The handset will be free from £40 per month on T-Mobile’s Flext 40 price plan.

Other features include:
* Large multi-touch screen
* Live photo gallery updates with friends pictures
* All contacts on and offline sync together in a live phonebook
* Compatible with Microsoft Office Outlook, Hotmail and other email providers
* High-speed web browsing and instant access to Google services including Maps, Google mail and Street View using T-Mobile’s award-winning mobile internet network
* Access to Android Market for a choice of thousands of applications to download direct to your phone

T-Mobile said it predicts that one in five of its regular mobile internet users will have an Android device by the end of 2009.