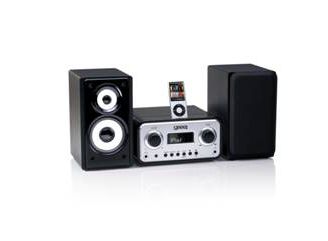 OK, so you’ve got an iPod, But you still like to play the odd CD. And then there’s the joy of FM radio, a real blast from the past. And that still-a-bit-new sound of DAB radio. Sounds like you’ll be up for Gear4’s latest micro system…

Yes, Gear4 has launched a DAB radio version of its popular CDM-100 system that came out in April. Called the CDM-D150, it’s got a suggested retail price of £119.99.

The built-in DAB/FM radio allows you to set 20 programmable preset stations, has five preset EQ settings (flat, classic, rock, pop and jazz) and comes with a clock and alarm.

The CDM-D150 charges an iPod when it’s docked and includes a line-in port for use with other music players.

It will be available in leading UK retailers or from Gear4’s online store from August.