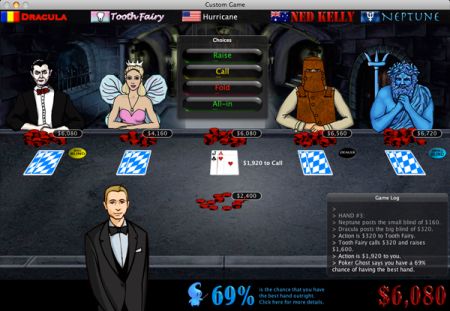 Poker is a fantastic game. But it’s so much better when the people you’re playing against speak their mind. All hail Candywriter then, which has released version 3.6 of Imagine Poker for the Mac and given all its characters something to say.

Candywriter teamed up with Los Angeles-based Fearnot Music Studios to bring voices to all 21 Imagine Poker Mac characters as featured in the current iPhone and iPod Touch version of the game.

The game allows players to pit their wits against 21 infamous characters from history, mythology, and legend – including Cleopatra, Robin Hood, Abraham Lincoln, Dracula, Napoleon, the Grim Reaper, and many more.

The interactive opponents are controlled by an adaptive artificial intelligence engine.

Also embedded within Imagine Poker is Candywriter’s Poker Ghost software, that provides detailed mathematical analysis of a poker hand at any given time.

A free trial of Imagine Poker is available for download, with the full version unlocked for $19.95.