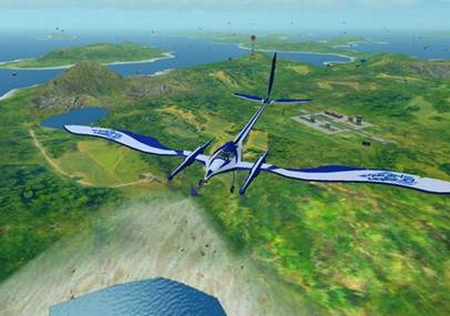 It seems the worlds of gaming and fitness have finally met in the middle. We’ve seen the Wii Fit offer everyone a glimpse into their health and exercise regime. A cycling program that is “likely to burn more calories and achieve greater muscle tone than with a less inspiring training session”. Plus a worthy Wii Fit rival from EA Sports. And now there’s an out and out calorie cruncher that uses a flight of fancy to take you away from the gym…

Yes, the Dogfight flight simulator allows you to take part in aerial battles while you also battle the bulge.

The product comes from Instyle Fitness, which calls itself a UK pioneer in “exergaming”.

Users propel the plane by pedalling a high end recumbent exercise bike and control the simulator via spring loaded handles.

“Designed to bridge the gap between exercise and entertainment Dogfight is the ultimate fun fitness for those who find traditional exercise dull and uninspiring,” says an official missive from Instyle Fitness.

“Stunning graphics and sounds instantly transport the user from the drudgery of the stationary exercise bike to the breathtaking world of virtual flight.”

Battle takes place in a number of different environments, including a hostile winter landscape, a tropical archipelago, a cityscape and a painted desert. There’s even a choice of futuristic aircraft.

Once the player has mastered the art of flight, it’s time to challenge other players in the gym to some aerial combat.

“Today’s young generation aren’t interested in exercising in front of the TV, they demand to be entertained and active gaming is the answer,” says Instyle Fitness director, Duncan Lawson.

“There’s no doubt that fitness as we know it is about to undergo a massive change for the better, becoming more fun, motivational and incredibly playable.”