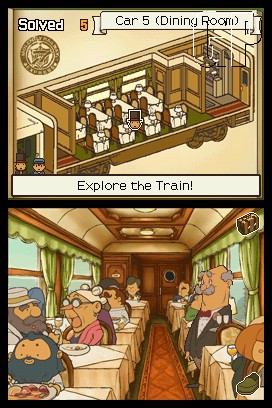 “Professor Layton and his young apprentice Luke return in an epic new puzzle adventure and enthralling mystery – Professor Layton and Pandora’s Box – set to launch on Nintendo DS and Nintendo DSi.
Professor Layton and Pandora’s Box features a brand new storyline and more than 150 brand new brain teasers, riddles and logic puzzles – all guaranteed to challenge and delight.
In this latest escapade, Luke and Professor Layton, the supreme puzzle master, set out on a voyage of discovery to uncover the mysteries surrounding the suspicious death of Professor Layton’s mentor, Dr Schrader. The inquisitive duo find a train ticket, beside Dr Schrader’s body, for the Molentary Express with no destination printed on it, this clue begins their adventure travelling from the big city on the luxury train into the unknown…
It’s up to you to navigate them through copious puzzles to determine who – or what – caused the death of Dr. Schrader and the truth behind the mysterious Pandora’s Box.

In keeping with earlier titles, the Professor has an enigmatic trunk that’s chock full of surprises. It includes three new mini-games puzzles: Camera, Hamster, and Tea Set.
With the Camera, the player can collect mechanic parts to bring it back to working order, after which the player has the opportunity to take photos at suspicious locations and using the powers of observation work out unusual changes in pictures in a new type of puzzle!
Also accompanying the duo is a pet hamster! He’s been snacking in the kitchen so he a bit overweight, but you can help him get healthier in his mini-game! Create an exercise course by arranging collected items in a course to give him a workout. But the placement of each object has a particular effect on him, so it will push you to work out the best arrangements of items!
With the Tea Set, the player can enjoy a relaxing pot of herbal tea. Simply drop three ingredients into the pot and tap the lid to start brewing, but not all concoctions are palatable. Make a good brew and it might come in handy!
But it doesn’t stop there, as players can also access downloadable bonus puzzles via the Nintendo Wi-Fi Connection. These games can be found in the Bonuses – a new puzzle will also be available each week for a limited period of time after the game launches. You’ll also find a mysterious locked journal, Layton’s Challenges and a bonus section.
Also for fans of the series, a special password from Professor Layton And The Curious Village can be used to unlock a special puzzle!”