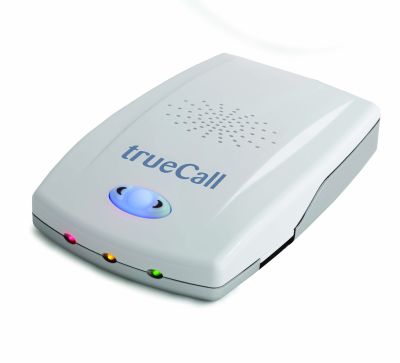 This week’s Dragon’s Den saw Britain’s top entrepreneurs fighting over a product named trueCall. South London inventor Steve Smith must have known he was onto a good thing when even Deborah Meaden (catchphrase, “I’m out”) tried to undercut her fellow Dragons. And the product is already shooting off the shelves at QVC.

Already retailing on QVC, trueCall stops nuisance phone calls, but let’s calls from your family and friends through. When it first appeared on QVC, it sold more units in six minutes than it did in 23 days at the Ideal Home show.

“Our success at QVC gave me the confidence I needed to appear in front of the Dragons,” said Smith.

“I am really excited at the prospect of working with Peter Jones, and ecstatic about the reception that QVC viewers have given us!”

trueCall plugs in between your telephone and your telephone line at home and controls the calls you receive using special patented software. However, Smith plans a version that is built into a phone handset now that he has the backing of Peter Jones.

The product works like a spam filter on email. If it recognises the caller as a friend or a member of the family – someone whose phone number is on your “star list” – your phone rings as normal. If the caller’s number is on your “zap list” – a list of the telephone numbers you don’t want to receive calls from – trueCall blocks the call, without ringing your phone, and tells the caller that you are not interested in their call.

If trueCall doesn’t recognise the caller’s number, or the caller withholds their number, it asks them who they are, puts them on hold, and then rings your phone. When you pick up, they announce themselves and you have the option to accept the call and add them to your Star List, take a message, or zap them caller – in which case trueCall plays them a polite message saying that you are not interested in their call, and if it has their number, puts them onto your zap list so future calls will be blocked.

trueCall works with all domestic phone lines (including cable phone lines, and lines with broadband), and with all types of home phone.

Nokia gets Touch Typing with X3