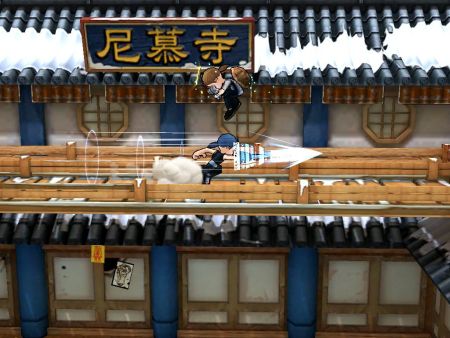 We’re going to let the PR people tell you about a new game that’s out today. But we warn you now that they may shout: “Rumble Fighter, a compelling and fast-paced online mixed martial arts fighting game is launching today in Europe,” the spokesman writes. “PC gamers from all over the continent can sign up NOW, create a character and start fighting TODAY, absolutely FREE of charge.”

Rumble Fighter is the first European game from casual MMO publisher OGPlanet, following a successful Beta period. There’s unlimited access to the battle zone and no subscription fees, with PC gamers able to join forces with friends in battles of up to eight players.

Players can upgrade and purchase a large variety of items and skills to enhance and personalise their game play experience by either earning carats, Rumble Fighters’ in-game currency, or by buying Astro’s, OGPlanet’s virtual currency.

To celebrate the full launch of Rumble Fighter, OGPlanet will be giving all players a random in-game Astro item.

“All players who will have logged in before Sunday 2 August at 23:59 will receive their very own surprise!” the excited spokesman says.

Rumble Fighter’s features include:
* Fully customisable – change your character’s appearance and choose its fighting style and techniques
* Solo and Team modes- choose to battle alone or join forces with friends
* Up to 8 players in the same room
* Transform – Rumble Fighter’s unique “ExoCore” systems enables players to evolve during battle and further enhance their character’s attributes.