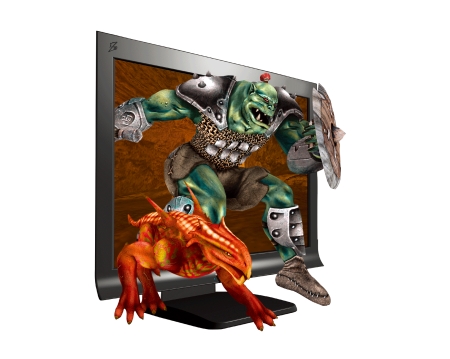 The current buzzword on everything from TVs to mobile phones is high-definition. Thanks to the constant improvements in technology, an HD movie can really make you feel like you’re really in the cinema. And since videogames have grown up alongside movies, they can go one step further – with an HD version of a game making you feel like you’re actually in the game!

HD History
If you’re still flustered about hi-def, it’s no surprise. Just when everyone was getting to grips with home entertainment, along came a new format. The little critter from Compare The Meerkat would not describe its introduction to the world as “Simples!” That’s because HD didn’t have the good sense to show up in a nice, easy-to-understand way. Following a fairly brief battle between two competing DVD formats, Blu-ray won the day. However, there’s still a lot to understand, as TVs still come in HD Ready and Full HD options and Blu-ray players have different profile numbers depending on whether they connect to the internet or play Picture-in-Picture videos. So, does the world of gaming make high-definition easier to understand? Not really. But that’s where we come in…

Crash course
For those still not up to speed with HD, here’s a quick refresher. The quality of the image you see on your television screen is defined by the number of pixels it can display, which is referred to as the resolution. Standard definition televisions show images using 640 x 480 pixels. HD Ready TVs display images at 1,280 x 720 pixels and, as those numbers suggest, bigger is better. Naturally, the 1,920 x 1,080 pixels of Full HD improve the quality of images even further. For further confusion, Full HD also comes in two different levels. The first is 1080i, with the ‘I’ standing for interlaced (odd lines are filled in onscreen first, then even lines). The highest level is 1080p, which uses a progressive scan (each line is drawn in sequence). HD content can also come from a number of different sources. SkyHD and Virgin Media transmit some television programmes in a format that makes the best use of compatible TVs. Blu-ray players also take the winning high-definition DVD format and make it shine onscreen. Even some online film downloads have been upgraded to display at HD quality when played back. With the US videogame market setting a new record of $21bn in 2008 for sales of software and hardware, it hasn’t been slow in making the best use of HD TVs either. There are currently three ways to enjoy HD gaming: Sony’s PlayStation 3; Microsoft’s Xbox 360; or a personal computer.

As the gap between movies and games grows smaller, so the gap between computer monitors and TVs does too. After all, internet TV services and home media streamers mean it’s as easy to use your PC monitor to watch content as it is to use your main television in the living room. PCs also have the advantage of only using a progressive scan, so no need to worry about all that 1080i and 1080p nonsense. Technically, this format has been able to display games in HD for a long time, with early monitors often using a resolution of 1,024 x 768 pixels as standard. That means older games would have been upscaled – made to look better than their actual resolution – while newer games are designed from the outset to make use of today’s Full HD monitors.

Sony knows what it’s doing when it comes to mixing the worlds of gaming and home entertainment. The PlayStation 2 included a DVD player at a time when the technology was brand new. Similarly, the PS3 includes a high-definition Blu-ray drive, allowing many gamers to get their first taste of the format without buying a separate player. The console is able to display video at a wide range of resolutions and that gives it an impressive game-playing capability, with modern titles working at 1080p. Pin-sharp gaming or movie-watching is as easy as plugging an HDMI cable into your hi-def TV. The PS3 can also use your home network to look for content on other connected computers and play that back onscreen.

In the early days of Microsoft’s Xbox 360 console, all of the games played at 720p or 1080i resolutions, making it an HD gaming platform straight out of the box. Since the introduction of better models in a continuing production cycle, that has been stepped up to 1080p and an HDMI connection has been included as standard. So, will the Xbox 360 play Blu-ray discs? Unfortunately, Microsoft backed the competing HD DVD technology, which lost the format war to Blu-ray. Despite repeated industry rumours, there won’t be a Blu-ray drive added to the Xbox 360 anytime soon. However, HD playback for Xbox gamers will come through downloads. The Xbox Live internet service will offer 1080p HD, streaming movies and television with 5.1 surround sound in the US this autumn. Being a Microsoft console, it can also stream HD video from a Windows PC or Media Centre that’s connected to your home network.

Just like a home cinema set-up, HD gaming isn’t all about the picture. Modern games have been engineered with impressive soundscapes that help immerse you into their worlds. Footsteps across the ground behind you may raise the hair on the back of your neck, while the shrill cry of aliens in the distance could warn of an enemy attack.
As with the PS2, Sony’s PlayStation 3 has an ‘optical out’ connection that can send audio to a home-cinema system and create surround sound. The PS3 also has the ability to take TrueHD and DTS-HD high-definition formats and output them through the HDMI connection using a sound format known as LPCM.
Meanwhile, the Xbox 360 offers multi-channel surround sound output and supports 48KHz audio thanks to its 32-bit audio processing. Sound connections can be connected to audio/visual kit using an S-Video AV cable or the HDMI connection.
Personal computers have also moved on from their early two-channel, stereo output. The internal soundcards that handle audio processing can now provide up to 7.1 surround sound, while some higher-end PC soundcards also offer digital input and output. PCs may also play back audio using TrueHD and DTS-HD.

When you want to take your basic home-cinema set-up to the next level, it’s time to get an audio/visual receiver – and the same’s true if you’re HD gaming. For starters, it’ll help if you’ve got a number of HDMI connections to display on your HD TV. Run a satellite/cable box, upscaling DVD player, Blu-ray player and games console into the receiver and they’ll only take up one HDMI port on your TV. The receiver can also help you get the best out of the picture and sound, offering different set-ups for each individual bit of kit.

Something like the Deluxe X-Rocker Recliner can offer plush leather covers, double foam padding, a cup holder, storage in one armrest and a lockable reclining feature. So far, so normal chair. However, it’s the built-in three-channel wireless audio, surround sound speakers and booming bass unit that make this your new gaming perch. The Deluxe X-Rocker Recliner works with all major game platforms.


In The Game
Once you’ve rigged up the ultimate HD system, you can really change the script. We select the best of the button-bashing crop that really put you in the movies…

Ghostbusters: The Video Game
It may not establish that there’s life after death, but Ghostbusters: The Video Game is solid proof that games and movies are a natural partnership. The story has been scripted by original writers Dan Aykroyd and Harold Ramis – with Aykroyd admitting that he views the project as Ghostbusters 3. The plot sees a new recruit helping Egon, Ray, Winston and Dr Venkman test their latest equipment, as New York City gets spooked once more. Familiar faces from the first two films make an appearance, while a whole new plotline could even see Rick Moranis coming out of acting retirement if a proper third movie is spun out of it! Forget that awesome costume you made for a fancy dress party – now you really can be a Ghostbuster. Transformers 2: Revenge Of The Fallen
The cast of Michael Bay’s Transformers: Revenge Of The Fallen features some of Hollywood’s hottest talent. Take a quick glance at the cast list for the game of the film and you’ll see how important that crossover is, with almost every member reliving their big screen role. Okay, so there’s one notable absence in the fact that Hugo Weaving doesn’t voice Decepticon leader Megatron. When his replacement is Frank Welker – the original voice of Megatron in the Transformers animated series – he’s not missed. Meanwhile, fans of the bendy ’bots will most likely be cheering the Autobots in cinemas. When it comes to the game they can let out their inner bad guy with a separate campaign that follows the actions of the Decepticons, expanding on the movie plot with additional missions and characters. Batman: Arkham Asylum
Review never thought it would live long enough to see another good Batman movie. Then Batman Begins and The Dark Knight blew our minds. Having glued most of the grey matter back under our skull, we’re now left waiting for the third outing for Bale’s billionaire vigilante. Until then, we’re going to be skulking around Arkham Asylum trying to save our hero from the insane enemies who’ve taken over the joint. At least until we make use of the PlayStation 3’s internet connection to download a special add-on that lets you play as The Joker on Sony’s console. After that we’ll be taking down guards with a particularly nasty hand buzzer and using our comedy X-ray specs to spot enemies, as we take control of the madhouse we call home. GI Joe: Rise Of Cobra
Sidestepping missiles as they skim past your body in stunning HD. Rattling off the bullets from a minigun at one of COBRA’s flying machines. Collecting character cards. Okay, so the third one doesn’t sound as adrenaline-fuelled, but Dax Berg, lead designer of the GI Joe: Rise Of Cobra videogame, shows that it’s not just filmmakers who get to work on their fanboy projects. The game includes 75 file cards hidden within it that can be used to unlock bonus content such as additional playable characters and special missions. Naturally Berg is excited to produce an exclusive all-new storyline that picks up where the film ends and is inspired by 45 years of rich GI Joe history. But getting to include the data cards that used to come with packaged with the toys is just as good. “As a kid I quickly became obsessed with collecting these data cards,” he admits. “I would trade some of my other action figures with kids on the block, not for their Joe Action figures, but for their GI Joe filecards! I would scour the neighbourhood looking for that one kid who didn’t care about his filecards and just wanted the toys.”

Harry Potter And The Half-Blood Prince
Games have long mimicked DVDs when it comes to offering bonus extra features and the previous instalments in the Harry Potter series allowed players to unlock additional material by completing tasks. These included such DVD staples as Making Of items like interviews with the game designers and some extra input from the cast of the film, who all voice their characters. You can find more of the same in the game version of Harry Potter And The Half-Blood Prince, which also includes never before seen gaming locations and the most complete Hogwarts ever (digitally) built. Anyone needing further proof of how games are getting the traditional film treatment should look for James Hannigan’s 29-track videogame soundtrack, which was recorded with the Philharmonia Orchestra at Air Studios in London.