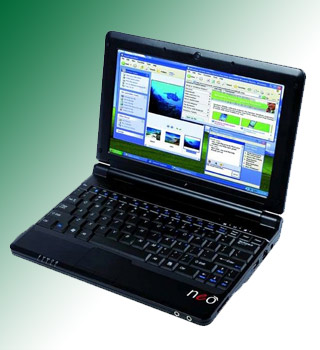 So the world and its significant other has a netbook and you could almost half expect to find one inside your next packet of cornflakes but that doesn’t stop vendors from punting new models. Step forward Stone and its Neo netbook.

The netbook seems to tick most of the right boxes as far as specs are concerned. It sports a 1.6GHz Intel Atom N270 chip, 1GB of memory and a 160GB hard disc. Screen-wise the 10.1-inch display has a resolution of 1240 by 600. The display has a matte finish, which makes it good for everyday use. The machine, as usual among these devices, runs Windows XP.

Connectivity, you will find that you have both wired and wireless Ethernet to connect to networks. There is also a VGA port to hook up to a larger monitor. There are two USB ports for connecting those really important peripherals and handily there is one on either side.

You can also connect up a microphone and headphones for your listening pleasure. There is also the near-obligatory SD slot for pumping in those camera shots. It has to be said, the arrangement of connections has been well thought-out.

There is also an Express Card 34 slot, which is rare to see on the cheaper end of the netbook market.  This means that you should be able to connect a 3G modem without the need of having your dongle hanging out.

The keyboard takes up the whole width of the case, which is a thankful addition to these devices (we have big hands). But the mouse pad is a little on the small side to be honest, but we guess it is the compromise in favour of the bigger keyboard. To be honest, an external mouse is a better option for serious work.

Above the keyboard is an array of shortcut buttons for launching the webcam, email or internet browser. That’s if you will ever use them.

The webcam is positioned above the screen and comes with a mic next to it. It gave a reasonable performance with Skype. The sound from the stereo speakers were good enough to watch online videos.

In everyday use, the machine is good for the light stuff, email. browsing and a bit of word processing. But with a lot of programs running simultaneously, it starts to labour. Also, watching HD content is a no-no, it just doesn’t want to know.

As for the overall design of the case, it could do with slimming down a bit. While other netbooks are getting slimming than a size zero supermodel, the Stone Neo looks like it has eaten one-too-many doughnuts. That said, it does feel pretty study and substantial.

While running, the machine can feel hot after a while of working on the thing however, it does run quiet. Our one bugbear is the battery life, it seems to only run for about 3 hours or so before giving out.