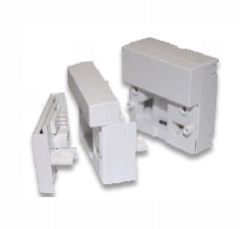 Getting your super-duper-fast Internet hand-delivered through giant red pipes by Samuel L Jackson (we may have misunderstood Virgin Media’s adverts) is all well and good if you can afford it/be bothered to sort it out. But BT is keeping those whose band is less broad in mind, and has come up with a way to improve the old copper wires.

The company’s unveiled the self-explanatory Broadband Accelerator – a small plate that customers install into their main phone socket to cut down on electrical interference.

The device, also called the I-Plate, isolates a redundant wire inside the socket that can slow Internet connections.

BT’s said that it may boost speeds by up to 1.5Mbps, but even if it doesn’t do that much, it should improve the connection’s reliability.

And what’s more, it’s free! Those that want it will have to pay postage of £1.20, but since the bulk of BT’s subscribers get around 2Mbps or less at present, it seems like a good deal to us.