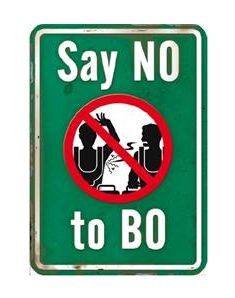 Its been a bit of a rollercoaster summer in regards to the weather but with the temperatures finally rising in the UK, Thorpe Park is taking action. From today, the theme park is banning visitors from riding the star attractions with their hands in the air in a bid to crack down on summer body odour complaints!

The unprecedented ban starts as temperatures are expected to reach 29-degrees C, making it the hottest recorded day of the month. Park visitors will be warned with ‘Say No to B.O.’ signs as they queue.

“Coupled with the fact that our rides are really scary and people sweat more than normal due to the fear and anticipation they experience whilst queuing up, it can get really pongy!” said Vallis.

“Therefore, we felt a ban in temperatures of 25̊C plus would be the best way of ensuring our guests have the most enjoyable experience and aren’t exposed to any unsavoury armpits!”

“When people are scared they produce more sweat due to the sympathetic nervous system kicking in,” explains Thorpe Park’s dedicated ‘thrillologist’ Brendan Walker, who uses his unique ‘Thrill Technology’ to record the changing physiology of a rider during high-adrenaline forms of entertainment.

“This reaction will bring on what is commonly known as the ‘fight or flight response’, where humans decide whether to face the threat they are faced with head-on or flee from the scene. Those who don’t bottle it and stick out in the queue to go on the ride will produce lots of sweat as the skin’s pores open up to cool the body down and prepare it for action.”