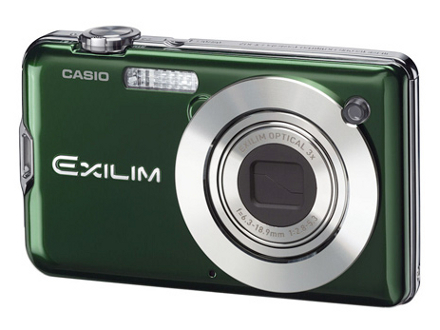 If this camera was any thinner, it would be asked to model at a fashion show. This Casio Elixim EX-S12 looks fantastic and won’t weigh you down.

The camera boasts many features to tempt the consumer with high-speed shutter technology, high-definition movie capability and a ‘dynamic photo’ mode, to name a few.

Despite its small size, it is easy to play with, given our sausage hands. It takes milliseconds from start up to taking photos, so great from those improptu shots at the nightclub. But, if you want to go pro, then you can swap from auto-focus to manual as well as pan-focus and infinity modes as well.

The main settings are shown on screen on a sidebar on the right of the display. To change settings just press the “set” button in the middle of the navipad and hte menus open out sideways.

Within the menu structure, you will find a whole host of other features. There is an “auto shutter” option, which in itself offers further options, such as blur, pan and smile. The smile option won’t take a picture until the subject says “cheese” – so great if you know a miserable so-and-so.

Picture quality wise, takes great pictures, thanks to its 12.1 megapixel sensors and its Elixim Engine 4.0 working behind the scenes. But the camera does fall down slightly with its wideangle lens. It does take a sharp enough picture but at maximum focal length the picture left us wanting.

Another drawback is the “continuous shutter” mode. It can take four frames a second but only at two megapixel resolution, so no great motor racing shots here. At full resolution, you will only get two frames per second.

For the web 2.0 generation, it comes withits own YouTube mode for uploading your hilarious videos shot with the camera.

While the camera looks great and comes packed with features, the zoom is weak and may not be the best camera if you want to take a series of shots. This was sourced from PC World.